A collection of essays and speeches by the late Supreme Court Justice Ruth Bader Ginsburg, interspersed with personal writings that chronicles the beliefs and goals throughout her monumental career. 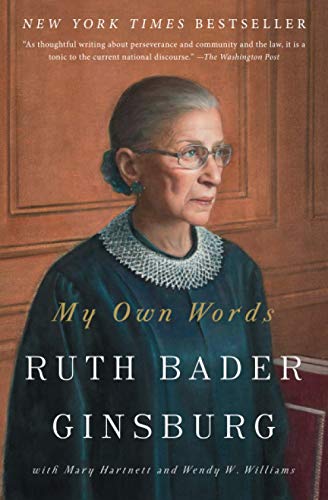 A feminist hero, Ruth Bader Ginsburg was the first female and the first Jewish Justice in the Supreme Court. She died in 2020, leaving a remarkable legacy in the American political arena.

For decades before her appointment to the Supreme Court, Ginsburg was energized by the idea of pursuing gender equality through the courts. Her personal beliefs and accompanying ambitions powered her to defy the odds of a patriarchal society to hold one of the highest positions in American government.

My Own Words is a collection of essays and speeches from Bader Ginsburg's life, going so far back as her primary school newspaper editorials to illustrate her lifelong zeal for pursuing equality. Beyond Bader Ginsburg's personal experiences, My Own Words goes into detail about the important function of the United States judicial branch and delves into the vital role of the Supreme Court in the U.S. legal system.

How fortunate I was to be alive and a lawyer when, for the first time in U.S. history, it became possible to urge, successfully, before legislatures and courts, the equal-citizenship stature of women and men as a fundamental constitutional principle.