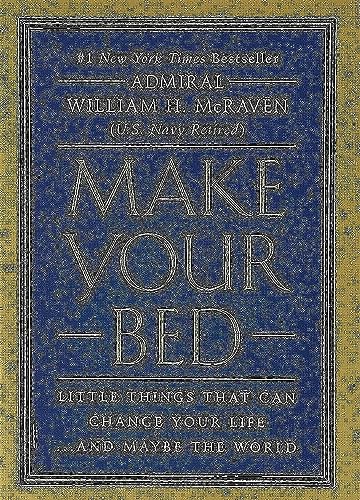 Make Your Bed encourages you to pursue your goals and change the lives of others for the better by showing that success is a combination of individual willpower and mutual support.

In 2014 Admiral William H. McRaven gave the commencement address at the University of Texas at Austin. While encouraging the students to improve the world, he gave many life lessons that could be of help. He had learned most of them during his Navy SEAL training – six months of runs in the sand, obstacles courses, unending calisthenics and continuous harassment by veterans, who wanted only the strongest to get to the end of it.

As a cadet, McRaven learned that success doesn't depend on social status, race or religion. It's not how good your parents were to you or which school you went to that determines your future. It's a combination of the little actions and help from others that makes people successful. The admiral's speech went viral on YouTube and later became a book.

In Make Your Bed: Small things that can change your life… and maybe the world, McRaven stresses that life is unfair, as everybody knows. What defines great men and women is how they deal with life's unfairness.

"If you want to change the world, start singing when you're up to your neck in mud."