How the World Works is a succinct, accessible introduction to the remarkable ideas of one of the great thinkers of our time — Noam Chomsky. 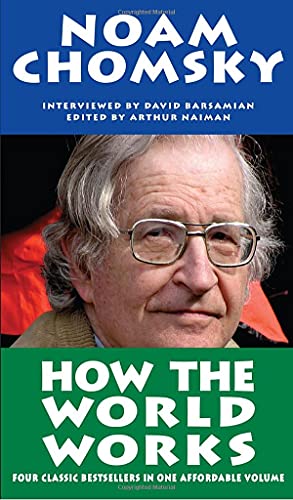 Noam Chomsky is one of the world's most influential modern thinkers. He is an American linguist, philosopher, and political activist known for his work in modern linguistics and the field of cognitive science. As an anarcho-syndicalist, Chomsky openly criticizes U.S. foreign policies, neoliberalism, and mass media.

David Barsamian is an Armenian-American investigative journalist, author, and radio broadcaster. He hosts the weekly radio program Alternative Radio, and his articles and interviews have been published in media such as The Progressive, Z Magazine, and The Sun.

How the World Works, published in 2011, is a collection of essays Barsamian put together based on hours of interviews, as well as additional texts and edits by Chomsky. Originally, the book was published as four separate titles. It sold over half a million copies worldwide.

The problem with real democracies is that they're likely to fall prey to the heresy that governments should respond to the needs of their own populations, instead of those of US investors.