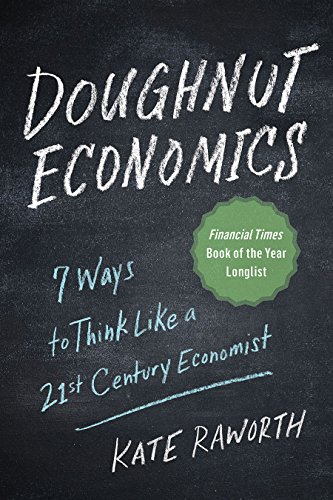 In Doughnut Economics, economist Kate Raworth makes the case for how to fix our economic system while transforming society and repairing our relationship with the planet.

Since the 20th century, mainstream economics has been obsessed with growth – more things to consume makes people happier, right? But our 21st century challenges of climate change, poverty, and population growth require a new paradigm.

Kate Raworth is an Oxford economist who has worked with the United Nations and Oxfam. In this book, Raworth argues for moving away from the traditional growth-oriented model towards a 'doughnut' model, representing the 'sweet spot' between the minimum of human need and the maximum that the environment can sustain.

Since its publication in 2017, Doughnut Economics has become an influential text in the field of sustainable development. By rethinking our approach to growth, we can reinvigorate economics with a moral purpose fit for the 21st century.

"What if we started economics not with its long-established theories, but with humanity's long-term goals, and then sought out the economic thinking that would enable us to achieve them?"