Design To Grow uses Coca-Cola as an example of how keeping a company stable and flexible at the same time over decades is not only possible, but a must to grow and scale your business across the globe. 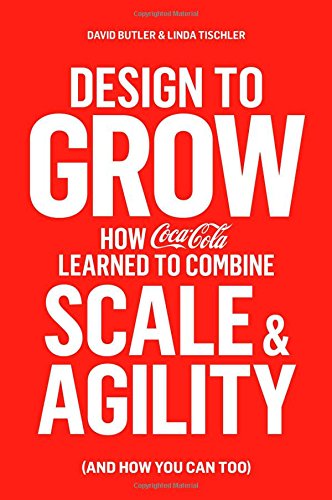 David Butler has helped startups scale and companies grow for over 25 years. The last 12 of those he has spent at no other company than Coca-Cola, most recently as vice president of innovation and entrepreneurship. He says that there's never been a scarier time in history to be an established company than now, because in the past decade, more giants than ever before have stumbled. Kodak, BlackBerry, Nokia, Blockbuster, Dell, Motorola, Yahoo, the list gets longer by the day.

So how does an almost prehistoric giant like Coca-Cola not only stay in business, but thrive in a world where any teenager can come up with an app that solves yesterday's problem better tomorrow? David thinks it's because from the start, Coca-Cola was designed to grow. To stay stable, but at the same time remain flexible enough to handle a very uncertain environment. Let's look at how other companies (like yours) can do the same.

Bad design is the default mode since it takes the least effort to create.