An inspiring memoir by a girl whose Olympic dream turned her into a survivor, an athlete, and a role model. 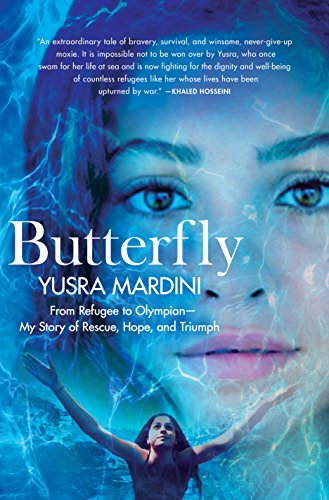 Yusra Mardini was just an ordinary girl with a passion for swimming and a goal shared by many others: to go to the Olympics. Her aspirations rapidly crumbled around her as war broke out in her hometown of Damascus, Syria. Suddenly, her only goal was to survive.

In 2015, she fled to the Turkish coast and boarded a small dinghy full of refugees bound for Greece. Her journey took her through Europe to Berlin and on to the 2016 Olympic Games in Rio de Janeiro.

Today, Mardini is an Olympic swimmer who was named a UNHCR Goodwill Ambassador and one of People Magazine's 25 Women Changing the World. Mardini's memoir reflects everything she is known for: accomplishment, courage, and a horrific past. But rather than a story of someone going from a Syrian refugee to an Olympic swimmer, Butterfly is a story of someone who proudly remains both, determined to inspire others whose lives have been unexpectedly upended.

I no longer care what it takes. I'll follow Phelps to the top. To the Olympics. To gold. Or die trying.