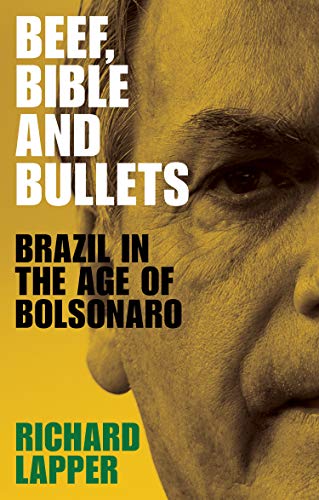 Jair Bolsonaro shocked the world in 2018 when he was elected President of Brazil. With a reputation as a non-establishment politician, Bolsonaro's unlikely rise to power was the result of longstanding trends in Brazilian society.

In Beef, Bible and Bullets, author Richard Lapper details Bolsonaro's rise through an exploration of Brazil's economic, social, and political history. Its title refers to Bolsonaro's key demographic support among farmers, evangelicals, and the military. The book, published in 2021, also describes the corruption scandal, rising crime rates, and street protests that also contributed to his success.

Richard Lapper is an Associate Fellow at Chatham House, having previously served as the Latin American editor for the Financial Times. Well-versed in the region's politics and history, Lapper examines the dangers of Bolsonaro's right-wing populism.

I asked God who I should vote for. And God showed me that I should vote for Bolsonaro. If you ask me why it was because of this revelation: Christians can't act on the basis of emotion but follow what God gives.