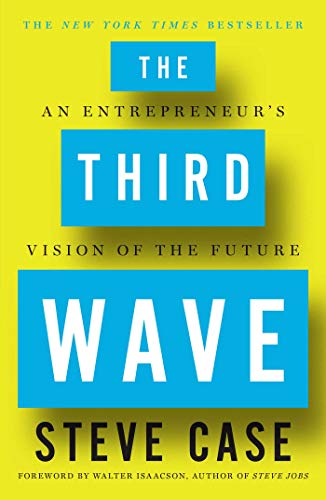 The Third Wave lays out the history of the internet and how it's about to permeate everything in our lives, as well as what it takes for entrepreneurs to make use of this mega-trend and thrive in a hyperconnected world.

The best books are timeless. You can read at any time period and learn something from them. Others need an update after a few decades – or to be re-written altogether. In this case, Steve Case did just that. The Third Wave is a re-write of a 1980 book of the same name by Alvin Toffler.

Back then, Toffler described three historical waves of how civilization had progressed until then. First, settling and starting to form an agricultural society, thus transitioning from a hunter-gatherer structure. Second, the industrial age with the modern, nuclear family in its center, providing mass distribution, consumption, media, entertainment, and education. His third wave is about the transition into the Information Age when knowledge started taking precedence over material items in terms of what's valuable.

Steve Case takes a look at the advent of the connected world and explains what the third wave of the Internet Age will bring, and how we can all benefit from it.

"We'll realize that what's emerging is the much broader Internet of Everything."