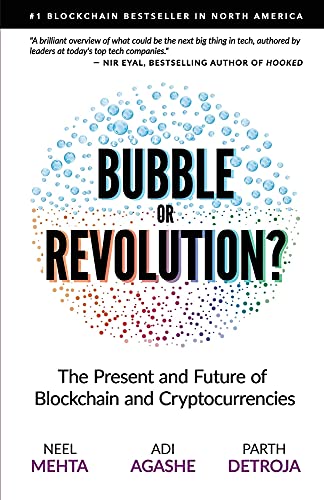 A trio of tech experts goes beyond the blockchain hype with a level-headed overview of where the technology might be useful, and where it probably won't be.

Billionaire Silicon Valley investor Marc Andreessen has called blockchain 'the most important invention since the internet.' By contrast, Warren Buffet has derided Bitcoin, the most famous blockchain-based cryptocurrency, as 'probably rat poison squared.' So what are we to make of this new technology?

Neel Mehta, Adi Agashe, and Parth Detroja are product managers at Google, Microsoft, and Facebook. In Blockchain: Bubble or Revolution, the tech professionals explain in layman's terms how blockchain works, while also rating its prospects for effecting change.

The book touches on cryptocurrency as well as the use of the blockchain for other applications, such as elections. The authors conclude that, rather than revolutionizing our economic and political systems, the blockchain's principal impact will likely be in business.

"The ultimate irony of crypto ... is that crypto is succeeding by doing exactly the opposite of what it was originally intended for ... Crypto will make governments and big corporations more, and not less, powerful."