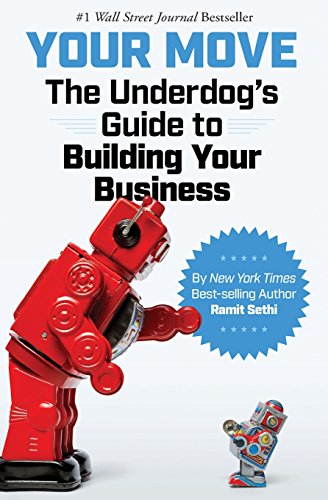 Your Move: The Underdog's Guide to Building Your Business is Ramit Sethi's no-BS guide to starting your own business that'll help you escape the 9-to-5, all the way from coming up with profitable ideas, overcoming psychological barriers and figuring out who to sell to to growing, maintaining and systematizing your business in the future.

Your Move: The Underdog's Guide to Building Your Business is a distillation of the lessons he learned about growing his business to over 1,000,000 readers, 50+ employees and millions in revenue.

Ramit comes from humble beginnings. Growing up with Indian parents, money was always tight.  Eating out was rare, gadgets were a no-go and Ramit started dreaming about a life in which he didn't have to turn every dime twice. But thanks to the discipline he learned at home, Ramit got into Stanford after graduating high school, and even applied to over 60 scholarships to be able to fund his studies.

His first scholarship check went right into the stock market – at the height of the hype in late 1999, early 2000. Ramit lost half of his money and vowed to get better with the subject. He read every personal finance book he could find. But when he talked to his friends, he noticed that even though the tips the gurus gave worked, nobody followed them – because nobody wants to give up their daily $3 latte to save $1,000 in a year!

What kept people from succeeding in how they handle money wasn't a lack of information, it was the psychology and fundamentals of human behavior that were flawed. As a result, Ramit launched IWillTeachYouToBeRich.com from his dorm room in 2004 and started sharing his ideas. Over a decade later, he's now the CEO of GrowthLab, which helps people start their own business so they too can live a rich life – and that's not just about money!

Your Move is divided into three sections: mastering the fundamentals, focusing on the right things and growing your business in the future. Let's go!

"The world wants you to be vanilla. They will always push you to look and act the same as everyone else. If your business is going to stand out and succeed, it's up to you to push back."