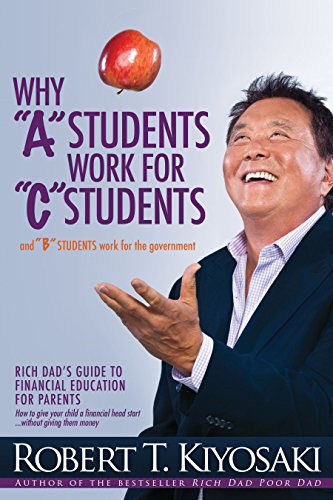 Why "A" Students Work For "C" Students contains Robert Kiyosaki's lessons on how the global financial crisis is the result of a lack of education, showing parents how to become truly money literate so that they can teach their kids how to attain financial freedom.

Since Robert Kiyosaki published the bestselling hit Rich Dad, Poor Dad in the late 1990s, he's become known as one of the biggest names in personal finance literature.

This follow-up warns parents against measuring the strength of their own parenting through how well their kids are doing at school.

Kiyasaki believes our education system has perfected its methods for turning our children into disciplined students – and, later, obedient employees. However, the qualities you need to ace an exam aren't necessarily what you need to become a high-flying entrepreneur or investor. The business world needs creative, out-of-the-box thinkers who aren't deterred by failure and aren't afraid to move out against the crowd. This is why the kids who get A-grades at school aren't always the ones who achieve success later in life. In this book, Kiyasaki unpacks why he believes we should rethink the ways we parent our children, and emphasise the one key lesson they might not be learning at school – how to handle their finances.