A book about the bounds of the human imagination, centering on some of the most influential scientific theorems and thinkers of the 20th and 21st centuries. 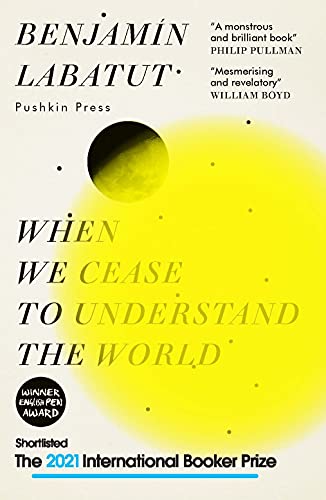 Some of the greatest scientists of the 20th century are also the most controversial: Fritz Haber, Karl Schwarzschild, Shinichi Mochizuki, Alexander Grothendieck, Niels Bohr, and Werner Heisenberg. Whether it was theoretical mathematics, quantum mechanics, or the flux of outer space, each of these thinkers went where the human mind had not travelled before.

Dutch-born Chilean author Benjamín Labatu has published several works in his native Spanish, ranging from collections of short stories to experimental biographies. Translated into 22 languages and shortlisted for the International Booker Prize, When We Cease to Understand the World presents a series of interwoven vignettes orbiting around the lives of some of our most daring thinkers. Labatu uses a dazzling collision of poetic prose, scientific theory, and historical accident to explore some of humanity's greatest discoveries.

The physicist, like the poet, should not describe the facts of the world, but rather generate metaphors and mental connections.