The Third Door follows an 18-year-old's wild quest of interviewing the world's most successful people to discover what it takes to get to the top. 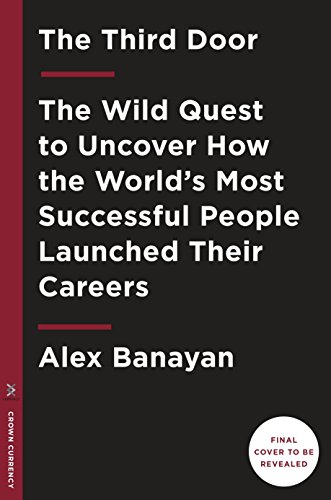 Finding success is like trying to enter an exclusive nightclub. There are two main paths: the first door, where everyone waits in line and hopes to get in, and the second door, where the VIPs effortlessly slip through.

What most people don't realize is there's always a third door. It may be sneaking through the cracked window at the back or going through the kitchen - but this one takes resourcefulness and guts. This is what the successful do. They look for hidden paths that lead to their goals.

Reading about Bill Gates as an 18-year-old, Alex Banayan realized he didn't want to be a doctor, the life his parents wanted for him. Instead, he was going to figure out how Bill Gates went from being a kid like him to one of the richest people in the world.

He became determined to travel the country, track down the wealthiest people, and interview them. After winning the funds on The Price is Right, he set off on his ambitious quest. The Third Door is Banayan's account of what happened next. In this book, you'll follow his exciting journey to crack the code of what it takes to succeed at the highest level, according to those who've done it.

You have to go for it, even if there's a chance you'll fail. The planets are never going to perfectly align. When you see an opportunity, it's up to you to jump.