Two Wall Street Journal correspondents recount the rise and fall of WeWork, the self-proclaimed tech startup that garnered a colossal amount of investments before its notorious downfall. 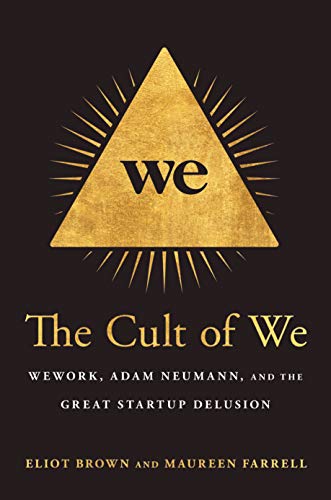 WeWork was once valued at $47 billion — more than tech industry giants like Uber and Airbnb. As the workspace rental startup prepared for its IPO, WeWork adopted a notorious reputation for poor governance. After the erratic CEO was forced out of the company by investors, the new executive staff quickly learned the company was bankrupt.

Elliot Brown and Maureen Farrell are reporters for the Wall Street Journal, covering startups and capital markets, respectively. In this book, Brown and Farrell examine how the eccentricities of CEO Adam Neumann, unprecedented interest from investors in the tech sector, and spectacular mismanagement contributed to the company's failure. Through transcripts and interviews with WeWork executive staff and associates, The Cult of We is the story of how a company became so large yet failed so quickly.

Most of the staff got years of promises of riches and now had nothing. Neumann was getting a $185 million payout to not be the CEO of his company anymore, on top of the $1 billion in stock he could sell. It was one of the biggest CEO golden parachutes in corporate history.