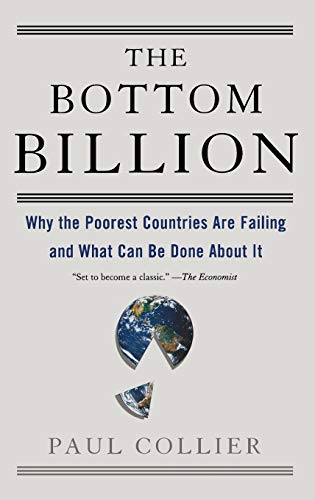 A small group of countries fall at the bottom of the global economic system. In another few decades, these countries might still be as poor as they were then unless… The Bottom Billion is all about that 'unless.'

Five billion people on our planet today live in prosperous countries, but that leaves a whopping one billion people living below the poverty line. If you're fortunate enough to live far away from impoverished countries, it can be easy to forget about this startling statistic in your everyday life.

Largely immune to the forces of the global economy, as the rest of the world booms, these impoverished countries are gradually falling further behind. Today, a billion human lives are lived in poverty – and their lives are getting worse, not better. We must ask ourselves why this tragic separation has been allowed to happen, and what can be done to change it.

A universally acclaimed and award-winning author, Paul Collier administers the Centre for the Study of African Economies at Oxford University. He also previously worked as the director of the World Bank's Development Research Group. Having studied the political and economic problems of the poorest countries, he continues to advise policymakers on tackling this troubling issue. In this book, Collier explores the reasons why poverty-stricken countries fail to make progress despite international aid and support. He also takes a closer look at the four traps that keep such countries bogged down in poverty, and the possible solutions to get out of it.

"Elections determine who is in power, but they do not determine how power is used."