Tacky is a collection of essays by American columnist Rax King devoted to the elements of kitsch and 'low' culture that shaped the early 2000s. 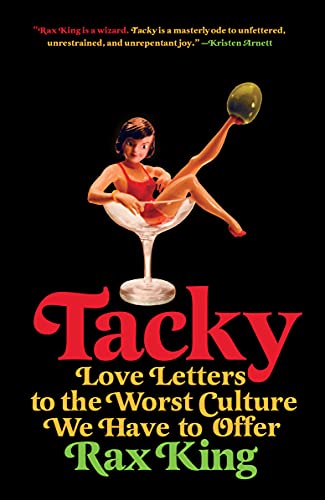 Pop culture is often labeled as kitsch and associated with bad taste by privileged classes and cultural institutions. More often than not, however, it is this type of 'low' culture that starts to symbolize the spirit of an age, and that shapes our memories of the past.

Rax King is a Brooklyn-based American author and podcast host whose works have been published in Electric Literature and Autostraddle, while her Catapult column Store-Bought Is Fine has been nominated for the James Beard award. Published in 2021, Tacky is a series of fourteen essays on low culture, and how it will be remembered by those who grew up in the early 2000s.

Life is short. It's important to attach oneself to the pieces that stick, regardless of whether somebody else believes the stuff is any good.