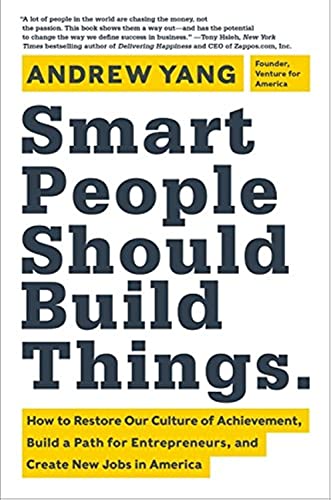 Smart People Should Build Things explains how the current education system works against the economy by producing too many bankers and consultants, instead of innovators, and how we can encourage more young people to become entrepreneurs to solve this problem.

Asking a college student what they want to do after they're done studying can be very hard for them to answer.

With the infinite options they face, it's nearly impossible to decide with certainty. Most millennials end up changing jobs many times throughout their career.

A few decades ago, people had to choose between a dozen subjects, mostly the ones they had in school, and then a few dozen variations and sub-topics of those initial ones. Today you can go to college to become a make-up artist, an animation graphics expert, or even a chef. And this doesn't even begin to describe the explosion of professions you can choose from after you graduate.

But Andrew Yang isn't worried about that. He's worried about how we deal with this paradox of choice – by defaulting to a very slim set of professional services, especially among the most elite schools.

Smart People Should Build Things shows you how Harvard, Princeton, and Yale graduates mess up - and what you can learn from their mistakes.

"We need people committed over extended periods of time to creating value, no matter how hard that is. We need people who care deeply about the work they're doing."