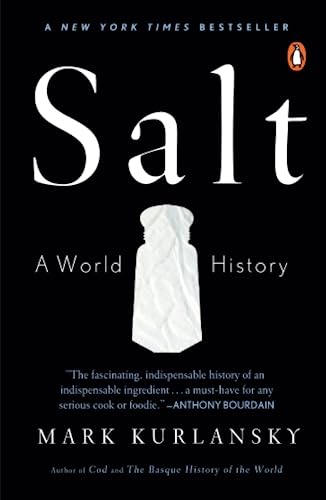 Salt: A World History explores how the everyday mineral we know as table salt has shaped human civilization throughout the centuries, causing wars as well as the rise and fall of empires.

Few people realize that when we're generously showering our popcorn with salt, we're consuming two volatile and hazardous compounds. Of course, this is only the case when these elements, sodium (or natrium) and chlorine (or chloride) stand alone. Together, they form sodium chloride - table salt - one of the essential building blocks of human life.

This mineral's vital role isn't limited to our body's chemistry but spans human history. Salt was the first international trade good, and was considered to be such a precious commodity that it was used as an ancient form of currency. When we discovered it as a means to preserve our food from spoiling, we desired it even more.

Salt: A World History will enlighten and educate as you follow the journey of salt. It's been used extensively around the world, from ancient China, where it was extracted from seawater, to the Nile Delta in Egypt where it helped the mummification process, and on to ancient Rome, where salt meant power.

Download Uptime to get the key insights and actions from Salt: a World History

"The Roman army required salt for its soldiers and for its horses and livestock. At times soldiers were even paid in salt, which was the origin of the word salary, and the expression 'worth his salt' or 'earning his salt.'"