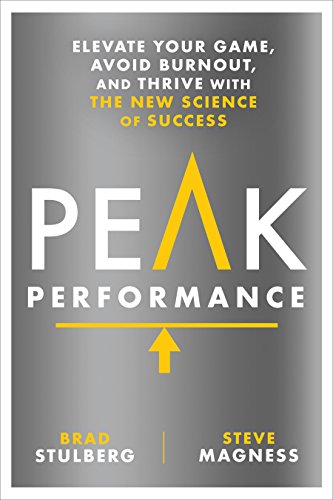 Peak Performance shows you how to perform at your highest level by exploring the most significant factors that contribute to delivering our best work, such as stress, rest, focus, and purpose.

In 2003, an 18-year-old student-athlete accomplished the staggering feat of completing the mile run in 4 minutes and 1 second, competing with top collegiate level athletes. This exceptional performance took no small effort. He sacrificed all of the regular habits most teenagers have in favor of early bedtimes and mornings, long practices, and strictly managing his day.

A few years later, another young man landed a job at the National Economic Council. He worked in a team that counseled the president of the United States on healthcare. Similar to the student-athlete, this young man also showed exceptional skills in his work. He ended up creating a working model for the effect of healthcare reforms on the US economy. Many of his friends wondered if he would someday become the president of the United States himself.

If these stories sound like those of incredible people with extraordinary skills, that's because they are. Unfortunately, both these strides ended in severe burnouts not long after these unbelievable feats. These are the stories of the authors of Peak Performance, Brad Stulberg, and Steve Magness. Thankfully, they were curious enough to examine their own struggles, which led to the birth of this book. In Peak Performances, they take you through their tips for maintaining a good work-life balance and avoiding burnout.

"Growth comes at the point of resistance. Skills come from struggle."