On Tyranny makes you more vigilant of the warning signs of oppression by identifying its political nature, how to protect yourself and society, and what you can do to resist dangerous leadership. 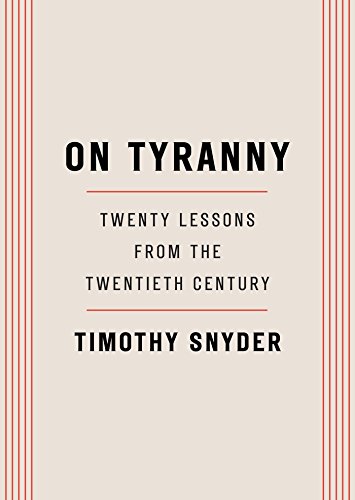 Up until recently, Americans mostly believed that the future would continue to bring progress. Far behind were the times of Fascism, Nazism, and Communism. Now they were enlightened, and working toward a globalized, prosperous society. It was almost like they believed history could move in just one direction: toward democracy and reason.

But letting our guard down meant clearing the way for some of the problems of history to return. Many believe tyranny could be on the horizon once again. So what can be done about it? Luckily, we have history to look at to help us learn to identify tyranny and stay away from it.

In his book On Tyranny: Twenty Lessons from the Twentieth Century, historian Timothy Snyder gives a comprehensive guide on how to resist and survive in America's current growing climate of authoritarianism. He expertly makes connections between events of the last 100 years and now, and will help you recognize the warning signs of a deteriorating democracy, teaching you how to protect yourself from dangerous political leaders.

The odd American idea that giving money to political campaigns is free speech means that the very rich have far more free speech, and so in effect far more voting power, than other citizens.