Journalist and climate justice campaigner Naomi Klein makes the case for a Green New Deal in this collection of articles, essays, and speeches, which look beyond the U.S. to envisage a plan for global climate action. 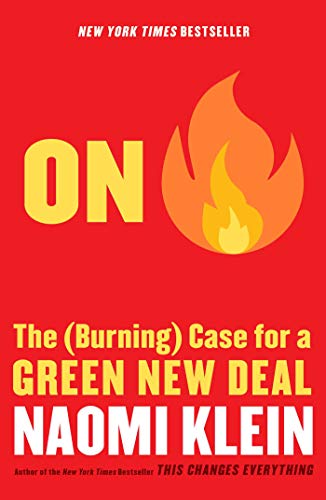 'Truly catastrophic unraveling.' This is how the Intergovernmental Panel on Climate Change (or IPCC) describes our future if average temperatures rise by more than 1.5°C. Yet our current trajectory is 3-5°C by 2100. Stopping at 1.5°C requires cutting greenhouse gas emissions in half by 2030, and entirely by 2050. As difficult as that goal may sound, there is a plan: the Green New Deal.

Just as the original New Deal responded to the Great Depression with massive investment and an overhaul of our social and economic system; the Green New Deal is a large-scale response to an even larger crisis. In this book, Naomi Klein highlights the Green New Deal's potential to create millions of jobs globally and lift up communities in need, while regenerating our planet.

Klein is a journalist, filmmaker, and activist known for works such as The Shock Doctrine and This Changes Everything. On Fire is a decade-spanning collection of the author's writings critiquing the modern capitalist system and raising the alarm for environmental justice.

The Green New Deal puts us all on an emergency footing: as scary as that would be for some, the catharsis and relief for many others, particularly young people, would be a potent source of energy.