Nudge shows us how we can unconsciously make better decisions by designing our environment to nudge us in the right direction, thus building our own choice architecture in advance. 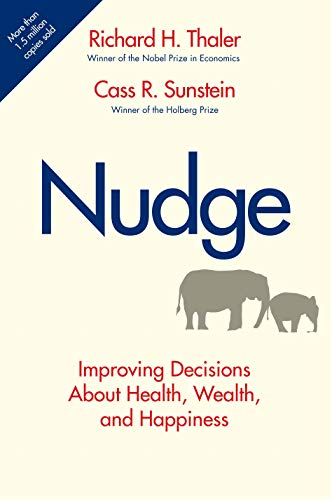 It's a basic principle of democracy that people should be free to make their own decisions. But what if people's decisions negatively impact society? Can the tension between individual freedom and the public good be navigated without authoritarian measures? These two professors believe it can.

Cass Sunstein has taught law for 27 years and headed up the Office of Information and Regulatory Affairs under US.. President Barack Obama. Richard Thaler is a professor of behavioral economics at the University of Chicago, who has collaborated with Nobel prize laureate Daniel Kahneman. Both scholars focus on the study of behavioral economics – the science of how people make decisions in the real world.

In this book, the authors argue that, contrary to standard economic models, human decisions are often irrational and even run counter to their own interests. But instead of directly interfering, governments and policymakers can indirectly 'nudge' people towards better choices by influencing the environments and contexts in which decisions are made.

First, never underestimate the power of inertia. Second, that power can be harnessed.