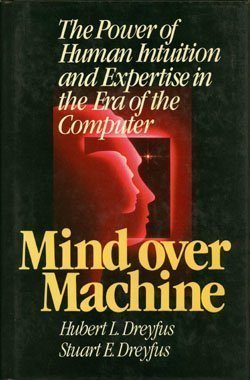 Since the advent of computers, individuals have been interested in training systems to achieve performance on par with or exceeding the capabilities of humans. With advances in technology, A.I. has become an increasingly important topic in discussions surrounding machines and their capabilities. In 1986, with artificial intelligence at the start of its development, brothers Hubert L. and Stuart E. Dreyfus discussed anxieties surrounding AI and its capabilities.

In Mind Over Machine, the Dreyfus brothers utilize their respective backgrounds in philosophy and mathematics to explore A.I. and computer development. The authors are interested in the shortcomings of A.I. as it stood in the mid-1980s: it failed to capture the unique and subtle ways in which humans approach logic and decision-making.

Whether one seeks to use a digital computer to model the heuristic rules behind actual problem solving … or whether one tries … to find optimal algorithms, the result fails to capture the insight and availability of the expert decision maker.