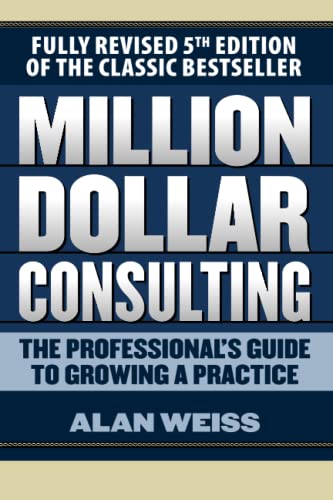 Million Dollar Consulting teaches you how to build a thriving consultancy business, by focusing on relationships, delivering strategic value and thinking long-term all the way through.

Alan Weiss has been in consulting for over 30 years. He's quoted, interviewed and published in the media frequently, delivers keynotes around the world and has written over 40 books on consulting issues.

Over the years he's coached and helped many people, who've tried to make the jump from regular job to independent consultant. Some rise, some fall. Alan distilled the patterns and lessons that helped those, who became successful consultants, including himself, into Million Dollar Consulting.

Not all of them are set in stone, but there sure are a few core principles the majority of "million dollar consultants" use as the foundation of their success. Do you wish to become an expert consultant and build your own business? Then you've come to the right place!

"You grow based on exploiting strengths, not by acclimating to weaknesses"