Stephanie Land depicts her experience as a single mother, low-income housekeeper, and survivor of domestic violence. 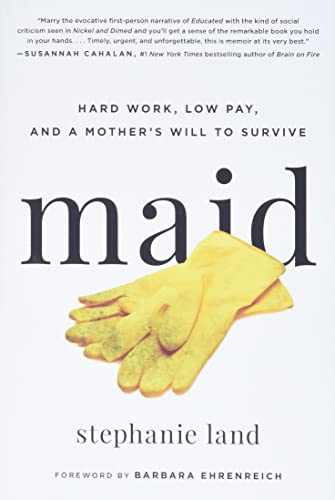 Millions of women struggle daily to provide for themselves and their families, yet single mothers are at an even greater disadvantage, as they juggle childcare needs with work. Compounding the economic stress is a general public distrustful of people in poverty, crafting a narrative that those on government assistance are lazy freeloaders.

Stephanie Land lived this reality as a housekeeper, homeless single mother, and survivor of domestic violence. Today, Land is an author whose work on poverty has been published in outlets like the Washington Post, The Atlantic, and Vox. In this memoir, featuring a foreword from activist and journalist Barbara Ehrenreich and now adapted into a Netflix series, Land describes her experiences as a maid and what they taught her about class in America.

Being poor, living in poverty, seemed a lot like probation - the crime being a lack of means to survive.