Invisible Influence helps us make better choices by revealing and reducing the effect that others have on our actions, thoughts, and preferences. 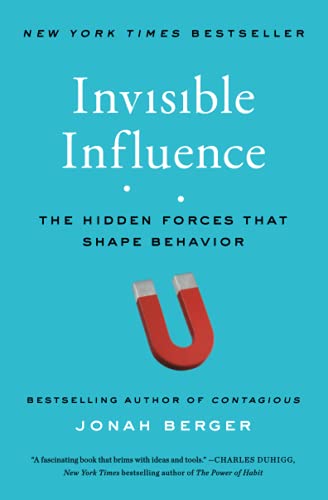 We would like to think that we are all individual and original. Maybe you feel like you march to the beat of your own drum while others just follow the crowd. In reality, we're all influenced by each other. You might have 'your own' sense of fashion, but unless you are making your own clothes, you probably are buying the same mass-produced clothes everyone else is.

Most of us are heavily affected by our surroundings without even realizing it. Have you ever felt like the people around you were influenced far too easily? One celebrity sharing their view on a political issue can convince tons of people to adopt that opinion. One friend, one documentary, or even just one tweet can shape how we feel about the world. And, of course, this isn't always a good thing.

Jonah Berger's Invisible Influence is all about how our world affects us more than we think. This is a book that will not only show you how to realize you're being influenced, and how to recenter yourself on your own perspective.

Just like atoms bouncing off each other, our social interactions are constantly shaping who we are and what we do.