Everything Is Obvious shows you that common sense isn't as reliable as you think it is and how you can change the way you make decisions with tried and tested scientific methods. 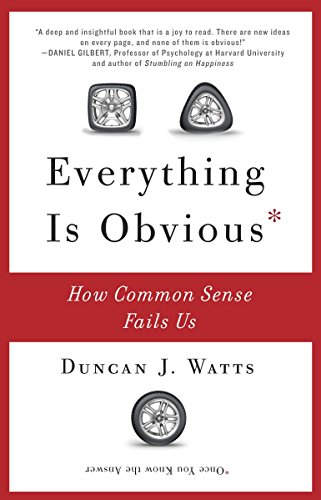 Duncan J. Watts is a researcher at Microsoft Research, exploring social phenomena in a hyperconnected world. He's most famously known for replicating an experiment Stanley Milgram conducted in the 1960s, called the small-world experiment.

Milgram sent 300 letters to random individuals in the U.S., with the instruction of forwarding the message to the same person, Alice, located in Boston, Massachusetts. The participants were sent a description of Alice, but no direct contact information. If they didn't know her personally, they were asked to reach out to someone they knew who might help them find her address.

It only took six connections on average for the participants to find Alice, indicating that most people in the U.S. were connected through a maximum of six people. You might know this as 'six degrees of separation.' Watts replicated this experiment with 60,000 people from 166 countries and 24,000 email chains in 2003, shedding new light on the matter, but confirming the six degrees theory.

Would you have thought it there were only six people standing between you and any random stranger? This goes against common sense but isn't any less true. In Everything Is Obvious, Watts tackles these surprising findings and why stepping out of your common sense thinking can improve your reasoning and decision-making abilities.

Common sense is wonderful at making sense of the world, but not necessarily at understanding it.