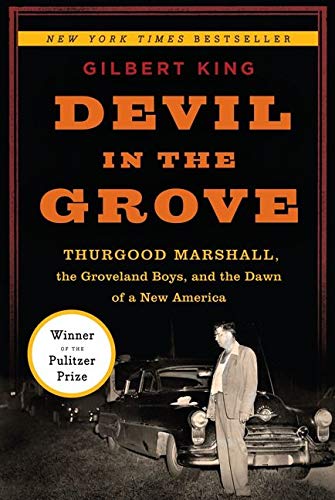 In 1949, four young Black men were accused of raping a 17-year-old white woman in Florida. The case of the 'Groveland Four' would soon result in a riot, the death of two defendants, the wrongful conviction of two more, and the unsolved murder of a prominent civil rights activist.

Gilbert King is an author and photographer who has written for The New York Times and The Washington Post. Awarded the Pulitzer Prize in 2013, Devil in the Grove details the harrowing case, focusing primarily on the experience of Thurgood Marshall, the NAACP lawyer and later Supreme Court justice who represented the defendants. Through painstaking research, King paints a disturbing picture of race relations and the struggle for justice in the Jim Crow South.

There is very little truth to the old refrain that one cannot legislate equality. Laws not only provide concrete benefits, they can even change the hearts of men—some men, anyhow—for good or evil.