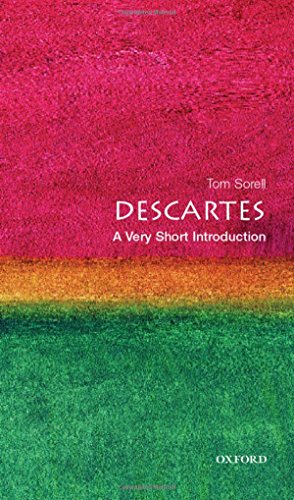 There's hardly a branch of mathematics, philosophy, or science that wasn't influenced by René Descartes. The philosopher, who lived from 1596 to 1650, provided invaluable contributions to mathematics, conceived a completely new branch of physics, and laid foundations for a novel metaphysics of the world upon which our modern science is built.

Tom Sorell is a lecturer in politics and philosophy at The University of Warwick, and is known for his work on Thomas Hobbes and René Descartes. In this installment of the Oxford University Press Very Short Introductions series, Sorrel provides a concise yet comprehensive overview of Descartes' life and thought.

Descartes' famous thought experiments laid the groundwork for modern philosophy, but his life's work encompassed far more. In this book, we learn just how much the man influenced the world we live in today.

Cartesian metaphysics supplied the missing theory. It held that the human mind was constituted by God to enjoy perfect certainty about material things when conceiving them mathematically.