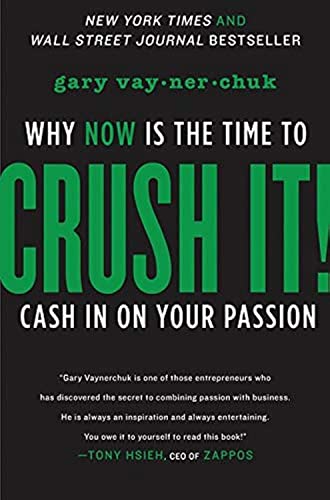 Crush It by digital marketing supreme, Gary Vaynerchuk, is the blueprint you need to turn your passion into your profession. It will give you the tools to turn yourself into a brand, leverage social media, produce great content and reap the financial benefits of it.

It's hard not to love Gary Vaynerchuk. The guy wants to build an empire on being the nicest guy in town, and he's well on his way to do so. Right now he runs VaynerMedia, a massive digital & social marketing agency in New York, has a very popular YouTube show called #AskGaryVee and speaks regularly at social media conferences.

Before he turned into a social media maverick, Gary ran his family's wine business, WineLibrary, in New Jersey. Crush It was written in 2009, the year he also founded VaynerMedia, and is based on the lessons he learned growing that business, primarily through an incredibly early and eventually very popular wine show on Youtube.

He realized that thanks to the web and social media, anyone can now turn their passion into their profession.

"There no longer has to be a difference between who you are and what you do."