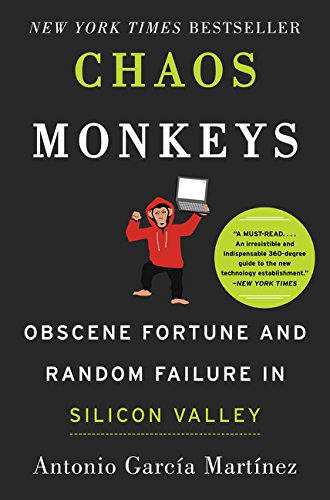 Chaos Monkeys lifts the veil on the mysterious and sometimes questionable practices going on behind closed doors in many famous Silicon Valley startups.

15 years ago, something that'd seem straight out of a movie took place. A few college friends rented a house, sat on the living room floor with their laptops, worked constantly surviving on a diet of pizza and Red Bull - and woke up millionaires. That's the story of many inventions like Mark Zuckerberg's famous social media platform Facebook.

We've all heard the story so many times in the media that it's almost become the expectation for a startup's beginnings - they blow up out of the blue. Silicon Valley and its startups are the world's hub of innovation - but why is that? How does it work and what are the secrets of these young companies' success?

Chaos Monkeys takes an insider look at it. More so, it reveals some of the unspoken - and sometimes dirty - ongoings behind the scenes of startup giants like Facebook, Twitter, and Google. Antonio García Martínez worked at Goldman during the financial crisis. He then found himself employed at a startup, before he founded his own, sold it to Twitter, and ended up working at Facebook.

"Ideas without implementation, or without an exceptional team to implement them, are like assholes and opinions: everyone's got one."