Amusing Ourselves To Death takes you through the history of media to highlight how entertainment's standing in society has risen to the point where our addiction to it undermines our independent thinking. 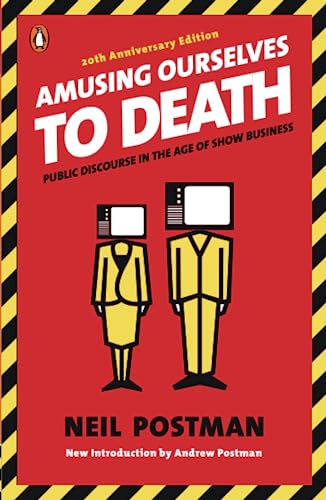 A perfect world, in which everyone is always happy, is called utopia. Some of the world's most popular science-fiction explores what would happen if not only we tried to build such a place, but also if it went wrong. This is called dystopia – a miserable society. Video games like Bioshock, movies like The Matrix, and lots of classic books fall into the dystopian genre.

Two you might be familiar with from high school days are George Orwell's 1984, and Aldous Huxley's Brave New World. One claims a totalitarian regime will watch our every move, the other assumes we'll be numbed to oblivion with consumerism and drugs. Especially after World War II, Orwell's prediction felt much more likely. So when, in the very year it "came true," Neil Postman showed up to the world's largest book fair and claimed Huxley was much closer to reality, he caused quite a stir.

Amusing Ourselves To Death was the result of his appearance. As early as 1985, it claimed that the rise of TV would be our downfall.

We do not measure a culture by its output of undisguised trivialities but by what it claims as significant.